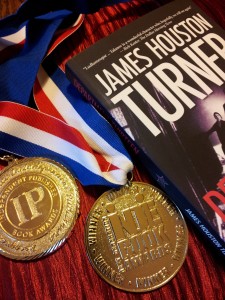 The Champagne was flowing freely on June 4th when James joined other distinguished authors at New York City’s legendary Plaza Hotel for the 2012 Indie Book Awards ceremony. Holding the distinction as the largest not-for-profit book awards program in the world, The Indie Book Awards boasts 240 awards for thousands of entries. Cash prizes total over $12,000, with judges that include “seasoned book editors (including many who have worked with major publishing houses such as Simon & Schuster, Harper Collins, Penguin Books, Bantam Books, Dell Publishing and Avon Books) as well as designers, book buyers, agents, book reviewers, publishing executives, writing professors, best-selling authors, and other industry leaders,” reads the Indie Book Awards website.

“There was such an exciting buzz at this ceremony,” says James. “What an honor to have Department Thirteen recognized in such a glamorous way (action/adventure category). The Indie Book Awards carry a lot of weight, and I am happy to say I brought some of that weight back home in the form of an übercool gold medal!”

With Department Thirteen winning top awards and achieving bestseller status on his 2011 tour, Turner says he is sometimes asked what he thinks the book’s appeal with readers is. “It’s Talanov, pure and simple,” he says. “Reviewer Daniel Cann said it best when he wrote: ‘I find the idea of a hero in his fifties far more interesting and compelling than a superhuman, indestructible, twenty-something programmed agent. Clearly Talanov is not your typical fifty-something individual, as he has the conditioning of someone much younger, but it is his brainpower and experience as much as his physical ruggedness that makes him so effective.’ ”