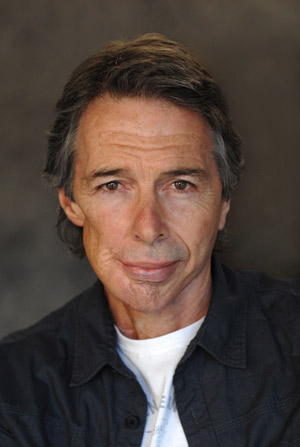 An American author known for his Aleksandr Talanov thriller series, surviving cancer, and his inspirational speaking tours about not being defeated by the hard knocks of life, James Houston Turner’s writing career has been varied. A native of Kansas, his first professional writing assignment was for the Dr Pepper soft drink company in Dallas, Texas. He then self-published book of free verse poetry, The Earth of Your Soul (1979), about his formative years as a geek in eastern Kansas. Some of his melancholy poems can still be heard there on late-night radio. After earning his master’s degree at the University of Houston – Clear Lake, he considered an academic career. Says James, “I remember one of my professors asking if that was what I really wanted to do. He saw my passion for history and the world and said he thought I’d be happier writing fiction than treatises for other academics. He was right. I just didn’t recognize it at the time.”

James then explored another of his loves — cooking — and authored a potato cookbook, The Spud Book (St. Martins Press, New York), which saw him become “Spudman,” one of America’s first television cooks on a coast-to-coast tour sponsored by French’s Foods, where he cooked with Regis Philbin, Pat Boone and “The Skipper” from Gilligan’s Island, Alan Hale, Jr. He then worked for five years as a photojournalist in Los Angeles, where he interviewed numerous inner-city residents of the famed Union Rescue Mission. Over 130 of his stories were published in its magazine, Lifeline. During this time, he also attended two National Prayer Breakfasts with the President of the United States and members of Congress, yet at other times found himself so poor he had to live on jars of peanut butter given to him by a church.

James finally began writing fiction as a result of his smuggling and courier activities behind the old Iron Curtain. “It was pretty high-octane stuff for a guy with an active imagination,” he says. “I’ve organized transports of hundreds of thousands of pounds of medical supplies, driven vehicles with secret compartments, interviewed death camp and gulag survivors, been shadowed by the KGB, organized secret midnight meetings with informants, located hidden mountain bunkers, and investigated legends of forgotten tunnels buried beneath the cobblestones and bricks of some of Central Europe’s most venerable cathedrals. But I lacked the discipline to convert those ideas and experiences into a completed manuscript. When the going got tough, I simply moved on to something else.”

Tragedy then struck when James was diagnosed with cancer. “My Aussie wife, Wendy, and I were living in San Diego at the time,” he explains, “and when the doctor found out we had neither health insurance nor the estimated $200,000 needed for an operation, he said, ‘Sorry, buddy, can’t help you,’ and walked out of the room. We waited for a while to see if he was coming back, but he was gone. We cried all the way home, figuring I had been handed a death sentence because the kind of cancer I had was aggressive and deadly. So Wendy called her sister in Australia to see if help was available there. There was, although we would have to pay for my treatment. And so, with weeks to live, I stepped off a plane in Adelaide, where for $17,000, a team of surgeons opened my face up like a book, removed half of my mandible and a tumor the size of an orange, then fashioned a new jawbone out of hip bone and put me back together again. I found out years later that I was not expected to live eighteen months. But people had been praying for me and I beat the odds. I was even hosted by Qantas Airways at the prestigious G’day USA black tie gala in Hollywood, where celebrities such as LL Cool J, Olivia Newton-John, Jon Voigt, Keith Urban, Daniela Ruah, Simon Baker and Sam Worthington congratulated me on my twentieth anniversary.

“My experience with cancer had a profound effect on me. It was a fight from which I couldn’t run, as I had from the tough challenges in my past. Becoming ill was my proverbial ‘line in the sand,’ and with the second chance I had been given, I knew I needed to quit wasting my life … that I needed get on with what I felt I was called to do, which was write mainstream fiction while sharing my “not being defeated by the hard knocks of life” story with others. For the record, I do not believe God caused me to get cancer. Some people blame God for all the death and disease afflicting us. I don’t. I don’t think God is like that. I believe in Jesus  Christ as a God who heals. I believe in miracles. And I just happen to be one of them.”

James’s first novel, The Search for the Sword of St Peter (published in Australia, 1996) was a result. Next came his acclaimed espionage thriller, The Second Thirteen (published in Australia, 1999), which saw him tour the American Southwest in cooperation with Barnes & Noble, Qantas Airways, and Jacob’s Creek wine. “I bought an old jalopy for $1000 and drove over three thousand miles to numerous signings and events,” he says. “My publisher, however, encountered financial difficulties with other projects, declared bankruptcy, and kept all of my royalties. To say it was a discouraging time is an understatement.”

In 2001, James completed The Identity Factor, an international thriller based on an ancient stone tablet with implications about the ownership of the Holy Land. “I was really proud of this book,” he recalls, “and I had a major talent agency wanting to sign me. A film studio had also expressed interest in the manuscript. Then came the attack on the Twin Towers, and virtually overnight no one wanted anything with those kinds of settings and themes. I was told to gut the story and reset it in Italy. I refused, and it cost me a possible film deal and representation by one of the largest agencies in the world.”

And from there, things got worse.

“With my career going nowhere fast,” he recalls, “we became pretty hard up for money, so I decided to put my writing on hold and apply for a customer service job with a large company in Adelaide, where we were living at the time. I was turned down for the job, not because I lacked skills, but because I was “too ugly” (referring to the facial scars I carry from my successful 1991 battle against cancer). At the time it was a real kick in the guts. But it was also a blessing in disguise, for it motivated me to keep pushing forward with my writing.”

The results of his renewed effort landed him a multi-book publishing contract with a mid-size American publisher, who helped back him on a promotional tour across the United States, with their republished edition of his debut Talanov thriller, Department Thirteen, winning three gold medals in book competitions. “That’s often the way it is,” he says. “Your darkest hour comes right before the dawn.”

Writing now as a successful self-published author from his home in Austin, Texas, James is sometimes asked why he chose to break away from his traditional publisher. “It was a philosophical difference about pricing, promotion, and who we work for. I work for my readers and focus on them, not sales reps from wholesale distributors and bookstore chains. Reps don’t read books. Readers do. Readers are the ones who write to me and tell others about Talanov and my books. They are the ones who turn out to see me at appearances and give me support when I’m going through a tough time. So, rather than continue to lock horns with my publisher about irreconcilable differences, I decided to go my own way. I’ve now got my own editorial team, graphic artist, and marketing consultant. My readers are the winners, and so am I.”