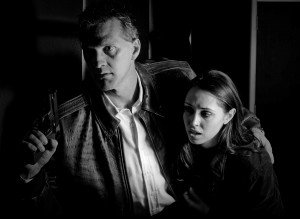 Explains James: “Called ‘Undercover,’ which I wrote and produced for my first QANTAS tour to the US back in 2000, it was way too long — seven minutes — but was my first effort to innovatively capture the attention of readers. For Department Thirteen and my 2011 promotional tour, I took it to the next level and organized a photo shoot with some good mates here in Adelaide. We took over a pub one Saturday morning and spent nearly three hours recreating a scene from the book, as well as shooting a promotional photo for tour sponsor, Chopin vodka. THANK YOU Jon Whelan (who has become the promotional ‘face’ of Talanov), Rachel O’Rourke, Connor O’Rourke, ACE photographers ‘Flash!’ (who took the accompanying Talanov action photo) and ‘Bong,’ as well as ‘The Highway’. I couldn’t have done this without you.”

You can watch the two-minute Department Thirteen book trailer by clicking HERE.