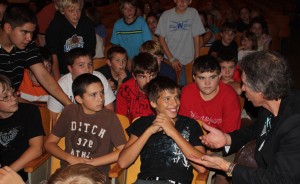 “This tour was one huge mountaintop experience,” says James. “For one thing, 2011 was my landmark 20th anniversary of beating cancer! Few people thought I would live eighteen months, so reaching twenty years was fantastic! My celebration year started with Qantas Airways hosting me at the prestigious G’day USA black tie gala in Hollywood. From there it just got better. 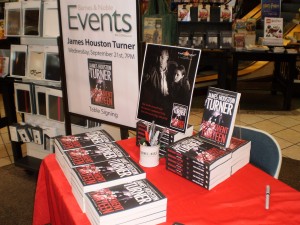 Next up: The Identity Factor (Comfort Publishing) came out in eBook format in March to some pretty stunning reviews. This was followed by several exhilarating months of writing to finish a new thriller (due out later this year), which was followed in September by my USA book tour for the first in my Aleksandr Talanov thriller series, Department Thirteen, which is based on (1) the actual KGB assassination and sabotage unit of the same name; (2) my years as a smuggler behind the old Iron Curtain; and (3) the actual KGB agent who leaked word out of Moscow that I was on a KGB watchlist.

The book had a spectacular launch at the University of Houston – Clear Lake (where I earned my Master’s Degree), preceded by a glamorous reception hosted by the Honorable Nana Booker AM, Australia’s Honorary Consul for the State of Texas, at her elegant Booker-Lowe Australian Aboriginal art gallery, in Houston. The book then hit bestseller status and went on to win the coveted USA Book News “Best Thriller of 2011″ award. Wow! Does it get any better than that? Funny you should ask, because — yes — it does.”