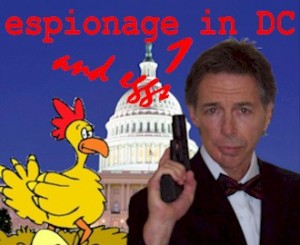 Speaking about his life as a smuggler and courier behind the old Iron Curtain and how these experiences inspired him to write espionage thrillers, James addressed an exclusive breakfast crowd at the annual NAFSA convention in Washington, D.C. “As an American living in Adelaide, James was a natural,” says Denise von Wald, Chief Executive of Study Adelaide. “We did an Oprah Winfrey style of interview, as well as furnished guests with complimentary copies of James’s thriller, The Identity Factor.”

According to the NAFSA website, the National Association of Foreign Student Advisors was founded in 1948 to promote the professional development of American college and university officials responsible for assisting and advising the 25,000 foreign students who had come to study in the United States after World War II. Over the years, NAFSA has grown into an international organization of educational advisors. “We were in Washington to showcase Adelaide as an educational destination,” says Ms von Wald, “and with James being a dual American-Australian citizen who has traveled and researched his novels both here and abroad, we wanted him to speak about some of his experiences, as well as share why he chooses to call Adelaide home.”