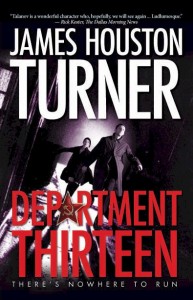 USA Book News is the premier online magazine and review website for publishing houses like Simon & Schuster, Random House, St. Martin’s Press, Penguin, Harper Collins, McGraw-Hill, and hundreds of independent houses. News of the award reached Turner in Philadelphia, where he was promoting both Department Thirteen and his acclaimed international thriller, The Identity Factor. “If I could have done cartwheels without landing myself in the hospital, I would have,” he says. “The award is a sweet victory for the many years of writing it’s taken me to get to this point.” James has a series of novels planned for Department Thirteen’s hero, Aleksandr Talanov, who has been described as “Bond meets Bourne”. The next Talanov thriller, Greco’s Game, also to be published by Comfort Publishing, is slated for a September 2012 release. “It takes Talanov in a completely new direction,” he reveals. “My goal with each book is to tumble readers in surprising and fresh new directions that keep them guessing until the very end.”