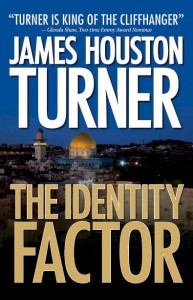 Esteemed internationally as a man of peace, Jerusalem’s Rabbi David Rosen praised James for the way he balanced religious and political sensitivities with unrelenting suspense in his international thriller, The Identity Factor (Comfort Publishing, 2011). “I knew I was walking a tightrope when I wrote The Identity Factor,” says Turner of his novel, which not only addresses current Arab/Israeli tensions in the Middle East, but challenges the traditional view about the origin of Genesis.

“My novel [also] postulates how a terrorist like bin Laden could escape the clutches of the US military time and again. It raises the bar of possibilities from fiction to fact in light of repeated claims that he actually had help in Washington.” To read more, click HERE.