JAMES INTERVIEWED BY THE GLAMOROUS ARTIST INTERVIEWS MAGAZINE ABOUT HIS 2011 USA BOOK TOUR AND WHY HE CALLS IT HIS “TOO UGLY TOUR”. 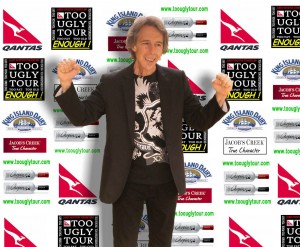 James spoke candidly with publisher Marisa Darnel about his twenty years as a struggling writer, his triumphant battle against cancer, his time spent as a smuggler behind the old Iron Curtain and how these varied experiences helped influence his writing because of the impact they had on him personally. “We seldom learn life’s lessons when the going is easy,” he says. “It’s in struggle and hardship that we’re especially teachable.”

One experience in particular was James being turned down for a customer service job in Adelaide because he was too ugly, referring to the facial scars from his cancer operation. “At the time it was a kick in the guts, because my writing was going nowhere and we needed money, and I was thinking of quitting. But that rejection was actually a blessing in disguise, because it motivated me to keep writing. So I decided to turn that experience into a platform and speak in schools about not letting the hard knocks of life defeat you. Kids today get hit with all kinds of similar judgments: you’re too fat, too poor, too dumb, too…whatever. If we believe that stuff, we’ll be defeated in life much more easily. Don’t fall into that trap!”